The other day I watched a film that i’d had in my list for the past 3 years. A film called ‘Biutiful’, directed by Alejandro González Iñárritu, and starring Javier Bardem, Maricel Álvarez, Hanaa Bouchaib & Guillermo Estrella.
Although an incredibly raw and brutally tragic story, this film really stood out as something that will remain in the back of my mind for a very long time. There are so many relating realities about this story that I can connect to things within my own life – mostly relating to death.
Death is such a prominent and sad existence within my history. My little brother died when I was 4. Many beloved pets as a little boy, including the blue tongue lizard, run over by a car who was still alive for a few minutes after it’s guts were shot out of its mouth… My Pop who died from sickness/diseases caused by the local hospitals disregard for sanitary and careful healthcare, (2005). What a slow, and horrible way to go. Ryan Dunn. I’ve witnessed my black hairy sister, Betsy (Labrador) die heartbreakingly from pancreatic cancer, in September, 2011. I have been traumatized ever since (the “death rattle” being something that has etched itself into my memory). In the year and a half since, i’ve had two friends die, who I had studied with during 2011. And now, currently, I feel that my other black hairy sister, Pipi (my black cat) is slowly dying. From experience, weakness is the very beginning of a long road of suffering; And i’ve sensed the signs over the past month or so. Her spine is showing through her back, more so than before. I don’t think she is eating and she hasn’t moved all day, today (27/4/13). ***day after update at foot*** Pipi was my Mum’s birthday present 11 years ago, and has been a big part of my life growing up. I don’t want to lose more of my family. It’s small enough as it is, and my mental state just can’t handle MORE about just how cruel death really is. Time goes by too fast. I hate how unexpected and weakening it is. It is true that the price we pay for love, is grief.

“Still are your lashes, and so is your heart”

In Biutiful, the main character Uxbal has the senses of a psychic and can see the dead. He offers his psychic services to families who need help helping their faithfully departed, pass on. As he learns of his own mortality, because of his diagnosis – cancer – he goes on a roller-coaster ride with his family and friends. A journey so sad and shocking.

I must say that in all my years of watching movies; I don’t think I have ever seen acting so well done (it really is ‘that’ true). The acting in this film is so raw and so real, it is truly believable. I think the director and crew worked so well together creating this visual story. It is usually pretty hard for me to completely concentrate on a storyline while watching a movie or tv show, from beginning to end. I’m always trying to concentrate but keep getting distracted by thinking about how things were filmed; focal lengths, apertures, films, post processing. A good film completely emerges my thought and mind into the story and totally disregards any “behind the scenes/technical how-to’s”. And this one really did fuse my mind and imagination into the story.
I’ve seen many of Alejandro González Iñárritu’s films; And all of them have captivated my concentration and have remained in the back of my mind, for years. Amores Perros (2000), starring Gael García Bernal, who has been a part of so many amazing films; 21 Grams (2003), written by an incredible writer, Guillermo Arriaga; And Babel (2006), a story involving four different story-lines (which reminds me of greatly of Traffic). Such great, must see films. Biutiful, though, I think symbolically, has impacted on me deeply, the most.

The symbolism of The Owl in the story is very beautiful, and majestic in a way. Even the symbol of the Butterfly – “Butterflies; souls of the dead, waiting to pass through purgatory”. I learned the next day (even though I had already presumed this) by coincidence, on Mythbusters, that the owl is a symbol of death and destruction. “Among the Kikuyu of Kenya it was believed that owls were harbingers of death. If one saw an owl or heard its hoot, someone was going to die. In general, owls are viewed as harbingers of bad luck, ill health, or death. The belief is widespread even today.” In fact, the Aztec god of death, Mictlantecuhtli, was often depicted with owls. There is an old saying in Mexico that is still in use: Cuando el tecolote canta, el indio muere (“When the owl cries/sings, the Indian dies”).
I realize that the meaning of the use of this symbol, relates to the man Uxbal meets in the snowy forest, who was his father (who died after escaping to Mexico). Now when I think of a black cat, I not only think of my little hairy sister, but I think of the mythical symbol of darkness and witchery. I can’t help but see the symbolism being connected, there.

Javier Bardem is one of my favourite actors. I first discovered his work years ago back when No Country for Old Men (2007) was released. Such a scarily awesome and bizarre performance. Little did I know, until later watching Collateral (2004) on TV (2008/2009) in one of my very first FULL HD TV experiences (back when Australia started broadcasting in FULL HD at a high bit rate stream), Javier played Felix who was kind of an antagonist. He played a great antagonist in Skyfall (2012). But I think, Javier Bardem’s most powerful role as an actor would be as Ramón Sampedro in The Sea Inside (Mar adentro, 2004); The real-life story of Spaniard Ramon Sampedro, who fought a 30 year campaign in favor of euthanasia and his own right to die. Such a poetic and raw story. Euthanasia is such an important service that should be supported by everyone in the world, I believe. The “option” should be available to those who want and need it.

Back to Biutiful; actor Maricel Álvarez – I hope her work has been commended. Also, the young Hanaa Bouchaib & Guillermo Estrella. They all deserve it.

Well, in these harsh times, I can only hope for brighter days; and may my art of photography, bring me the satisfactions of making others happy and helping my family be happy. We have to enjoy as much of our lives as possible. We need to be grateful of everything beautiful around us. We just need to be happy and comfortable in our days alive.
Here is a portrait of Pipi taken on Thursday, the 25th of April, 2013. 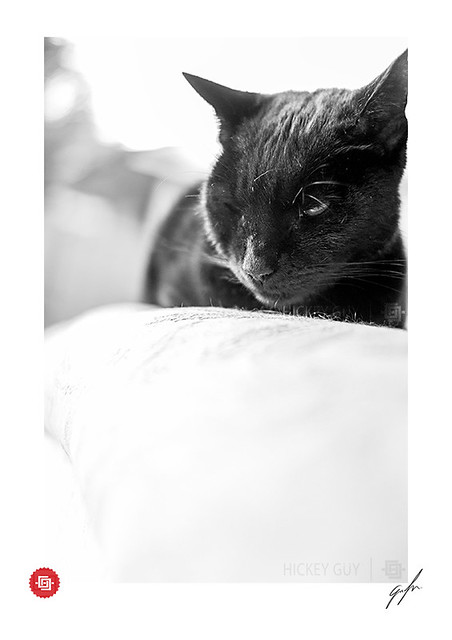 P.s. For more movie recommendations that I don’t share here on the blog, I usually post on Facebook, through the IMDB. So go ahead and hit the Follow/Subscribe button on my profile.

***Pipi update (28/4/13) – We went to the vet this morning and discovered a few problems going on. It seems as though she has some teeth/gum/ulcer problems causing swelling/infection and high body temperatures. She is also sore in other area’s of her body and that could possibly be old age but could also be connected. There was even a mention that Feline Aids (FIV) could be a possibility. She’s on pain killers and antibiotics right now, at home, awaiting another vet visit later in the week for further tests. I hope she can pull through…