Last year, 2K13, on my 21st birthday, I happened to receive an attractively courageous, large and heavy anamorphic projector lens. Now why would someone like me ever want something like that? – Well, sometime in August, one month before my birthday, I did some searching into the “cinematic world”. After completing the Dirty Harry series with my Dad in the month prior, I wondered what was behind the technical process of achieving oval shaped circles of confusion – aka oval bokeh (and beautiful, atmospheric optical flares). I came to discover that this was achieved through the shape of the cylindrical iris (aperture) in combination with the squeezing effect from an anamorphic lens.
After, with this new lesson learnt, I wanted to see if and how I might be able to add this look to my work. Vidatlantic’s ‘ISCO Dancing Part II’ video on Vimeo, rendered me completely “in love” with the look and feel of this cinematic art. It seemed achievable, and soon to be realised, affordable (a very lucky moment of fortune).


I found it incredibly interesting, essential and important to share here, this following excerpt from “Anamorphic Now” =

Apocalypse Now, Blade Runner, Close Encounters of the Third Kind, Bridge on the River Kwai, Evita — if you were enthralled by the look of these classic ’CinemaScope ﬁlms, you may be considering anamorphic lenses for your next production. Angénieux, ARRI/ZEISS, Cooke, and Scorpio showed prototypes of new anamorphic lenses at NAB, some expected to be ready later this year, others next year. If you need your anamorphics right away, Hawk primes and zooms have been made by Vantage for the PL world in Weiden, Germany since 1995. Panavision has covered the PV world since the late 1960s. The pages following this article present lenses to purchase or rent. Hawks are mostly rented; a few are sold. Panavision only rents. But ﬁrst a few words about anamorphic.

In December 2009, I wrote, “Pretend for a moment that you are a Studio Mogul. It’s your job to predict the next big thing and plan accordingly. Unlike the local television weather forecaster, who gets it wrong most of the time, you will be summarily escorted off the lot for anything less than perfect prophecy.

“After the 3D Gold Rush of 2009, how will you lure audiences out of their HD, 3D, and soon 4K-equipped home theaters—and propel them into popcorn-popping and snack-selling multiplexes? In two words (as Sam Goldwyn might say), Anamorphic.”

Twentieth Century-Fox bought the rights to the technique from Henri Jacques Chrétien in 1952 to produce The Robe, the ﬁrst feature ﬁlmed with an anamorphic lens. It was promoted as ‘“the modern miracle you see without glasses,” to compete with the 3D movies being made at the time—and TV. (The Today Show also premiered that year.) Sound familiar?

With spherical (“normal”) lenses, the 2.40:1 aspect ratio “wastes” a lot of unused space on the sensor or ﬁlm negative. The top and bottom of each frame is cropped, or letterboxed, out.

With anamorphic lenses, the width of the picture is squeezed (usually by a factor of 2x) to ﬁt the sensor or aperture. This lets you use the entire image capture area, without letterboxing, and the result is a picture with more pixels, more resolution, and less noise . This was one of the original reasons why anamorphic (’Scope) was developed in the ﬁrst place in the 1950s—to use more ﬁlm negative area with less grain and more resolution.

Peter Märtin of Vantage Film, makers of Hawk Anamorphic lenses, explains. “Anamorphic lenses use cylindrical elements to squeeze the image in one axis only—the width, not the height. That means an anamorphic lens has different focal lengths: the horizontal part of the image is the wider focal length and the vertical is the longer focal length. Also, the lens has two nodal points. (The nodal point is where all light beams converge when going through the lens.) One nodal point is for the horizontal part of the light rays, and the other one is for the vertical. Essentially, the lens records the image in a sort of three-dimensional way.

“It’s similar to looking at a landscape with one eye closed. If you hold up your hand and move it closer to you, your hand will covering more of the background. Move side to side, and you reveal different perspectives behind your hand. You get information about the three-dimensionality of the room. Anamorphic lenses do something similar: providing the two dimensional sensor a part of the three-dimensional information. It’s almost 3-D, perhaps 2.5D.”

There’s something inexplicably appealing about anamorphic lenses, and it’s not inextricably tied to blue line streaks or oval bokehs.

Peter continues, “The anamorphic look is very elegant. The lens is not a neutral, technical, observer. Instead, it is subjective. It changes the scene slightly, adding out of focus areas, providing depth to a sequence. It’s very appealing for faces, good for beauty. It gives actors a beautifully cosmetic, elegant, interesting, different look. With a long spherical lens, the face might look ﬂattened, which is not always ﬂattering. The anamorphic lens gives you depth and is pleasing. A lot of cinematographers are using anamorphic lenses mainly because they look so beautiful for faces.”

If you were thinking in terms of a 100 mm spherical lens and wanted the same horizontal ﬁeld of view in anamorphic, you’d choose a 200 mm anamorphic lens. Of course, the vertical axis would be “tighter” because the vertical angle of the anamorphic is the same as the spherical.

The out of focus look of a 100 mm anamorphic lens is different from the spherical 100 mm. You get less depth of ﬁeld. An actor would appear more separated from the background. Anamorphic lenses whose cylinders are in front will provide oval shaped bokehs. The out-of-focus hot spots in the background will be egg shaped. The more out of focus they are, the more squeezed they will appear to be. Rear anamorphics don’t have oval bokehs, and the rear anamorphoser results in a stop of light loss. Some of the new anamorphic lenses on the next pages are hybrids, with cylinders spread among several elements throughout the lens.

After my birthday, having this amazing piece of metal and glass in my hands, the ISCO Gottingen MC 2X, I found it difficult to find patience, as I knew I didn’t have all the tools I needed to use/utilise this particular paraphernalia. Nine months later, June of 2K14, I was super lucky in finding a somewhat hard-to-find AI-converted Nikkor Nippon Kogaku 50mm 1.4. Using this lens with an APS-C/1.5x cropped sensor, the focal length does not change but instead gives you 1.5x of what would fill a 35mm frame – the same field of view a 75mm lens would deliver. This would be the minimum focal length needed for my particular sensor, as major vignetting from the ISCO, and insides of the lens barrel would be visible with any less FL.
Paired with a clamp and ⌀ correct step down ring, I have been able to explore in recent months this year, a whole new dimension in photography. So much so, I have been tempted many countless times, to look into Videography – Such a daunting world of massive gigabyte and terabyte clusters! Too much for me to handle right now. I feel that my true passion lies in still photography. I certainly don’t want to distract myself too much from that. Can’t lose focus! 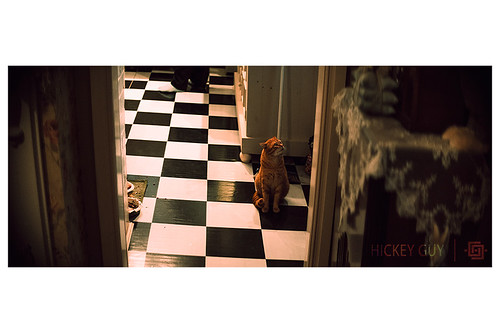 One of my favourite photographers today, who has inspired me for years, Sam Hurd – with his great prolificacy and energy, covered a familiar topic on still photographic anamorphics in the following article, here. Sam brings up a big point that i’ve struggled to resolve and clarify over the past year, and that is how the wide anamorphic format can apply to still photography. Why not, right?! The range of aspect ratios set in history, was made for the “cinematic” motion picture viewing experience. Why could this not be a part of still photography. After all, photography has always been about breaking the boundaries. In this case, literally.

I wish to explore more with what I wish to call ‘Anamorphica‘…. This new project I want to go forward with, I hope, might bring adventure, both fun and satisfying.
An idea I had last year, was to combine audio recordings, to play in tandem with a presentation of anamorphic images – As an extension of the cinematic viewing experience (aside from the theatre setting). Maybe stories could be told or expressed in a more rewarding way (depending on the subject of the matter).
What inspired me to develop such an idea, came after I watched a video of one photographers documentary on the political war in Egypt a couple of years back. The video featured Magnum photographer, Domonic Nahr‘s body of work in motion, accompanied by an audio recording the photographer made whilst working in the streets, filled with people-power. It was compelling and added a new layer, an extra dimension to the experience of viewing this story.

Thinking about presentation comes to mind. In a modern gallery – What would work? Many of the expected printed outputs would work perfect in my case of thinking. Panoramic prints in super wide frames would look amazing. But to letterbox or not? Maybe, in this electronic day and age, a monitor would suit my purpose. Maybe some kind of anamorphic monitor with speakers or headphones attached. This actually brings back a memory, from when I was first flabbergasted to see a native 21:9 cinematic, wide screen LCD television (by Philips) a few years back. The post production work/VFX brought me to discover the incredible ‘Carousel‘ video. I remember studying the various sequences repeatedly, watching those clowns in reverse, just to wrap my head around how someone could come up with such a recipe. It was amazing, and I loved the cool TV they were advertising.
It may be a novelty idea somewhat, but possibly it could catch on as an idea. Maybe others might tap into this kind of thinking…. I’d love to see where we could all go with super cinematic wide screen monitors showcasing still Anamorphica.
—-

Presented here you can see what Cinerama looks like flat – Ultra wide; and a Smilebox simulation of the curved Cinerama screen.

P.S. After yesterday’s encounter with ‘How The West Was Won‘ on TV – I can’t help but imagine how cool it would be if there were a Cinerama television set available today – a Smilebox! What an experience it would be to jump in and witness the experience of an ultra-wide, panoramic motion picture, that wraps around our FOV.